Did you know that the construction industry is responsible for half of the countries greenhouse gas emissions? Recently, various buildings and developments have been built with the main focus on reducing greenhouse emissions to help reduce businesses carbon footprint.

Here are a couple of examples of eco-friendly construction practices and companies.

Modular homes are made to specific measurements in factories, which not only reduces waste by around 50% but also reduces the time to build by 30-50% (dependant on size). Considering construction waste accounts for around 40% of landfills, modular builds reduce this quite significantly so this is a major plus for eco-conscious homeowners. Another win for modular builds is that the majority are typically powered by solar panels thus reducing the need for energy.

Based in America, this company has come up with a brilliant idea to provide shelter for people who don’t have a place to call home, in collaboration with a non-profit company called New Story. In 2018, ICON became the first in America to secure a building permit for 3D printed homes. The structures are printed using a mobile printer, having the ability to produce an 800 square foot home in less than 24 hours and for a fraction of the cost of a traditional house. Each home costs roughly $4,000 (just under £3,000) with the plan being to include locally-sourced materials.

ICON is also partnered with New Story to create the world’s first 3D printed community in Latin America to serve families without access to adequate housing, which when finished later this year, will house more than 400 individuals. The average family in the community is four individuals, who are living on less than $200 per month. Families are being involved in the home and community design process by speaking into the designs before construction begins.

Building sustainable homes for over 20 years in the Bristol, Bath and the South West areas, Greenheart has extensive experience in building eco-friendly, modern, timber-framed structures, using WARMCEL to insulate. What is WARMCEL? A 100% recycled newsprint, which is fire retardant, carbon-neutral and provides improved airtightness with no voids.

Westward Housing has introduced Bee Bricks to their new builds across Devon and Cornwall.  The easy to install bricks help improve bee habitats for solitary bees such as red mason bees or leafcutter bees which don’t live in hives, both of which do not sting. The bricks have a solid back and cavities on the outside wall with no way of entry into the building. With 90% of bees being solitary and 1 in 10 facing extinction, these bricks provide a simple way in helping the decline in population. To buy a Bee Brick, click here. 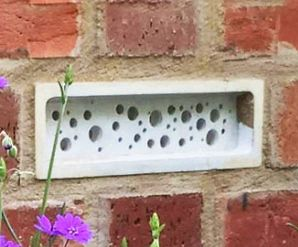 Mental Health within the construction industry

Physical health and safety is the utmost importance on site, so why are mental health issues so taboo to talk about within the industry?

A day in the life of payroll

Sarah is the 1st to feature in our new blog series. Each week, we will be showing you an insight into who works for NOW, what a typical day looks like and advice to pursue a career within their role.